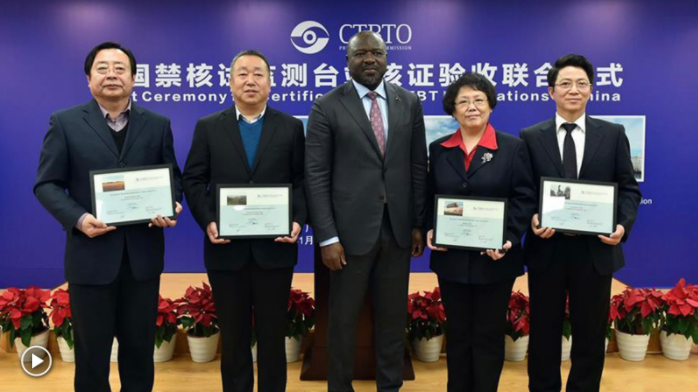 "Certification of these monitoring stations is a symbol of China's continued dedication to achieving the goals of the CTBT," Zerbo said at a joint certification ceremony.

On December 16, 2016, the first International Monitoring System (IMS) station in China’s national network of 11 facilities – RN21 in Lanzhou – was certified to monitor global compliance with the Comprehensive Test Ban Treaty (CTBT). Two primary seismic stations – PS12 in Hailar and PS13 in Lanzhou – were certified in November 2017, and two radionuclide stations – RN22 in Guangzhou and RN20 in Beijing – were certified in September and December. These stations monitor possible nuclear explosions by measuring the abundance of radioactive particles and noble gases in the atmosphere and seismic waves underground.

As the second signatory to the CTBT, China has always actively participated in the international nuclear disarmament and non-proliferation process. Having five IMS stations certified within one year is the evidence that China's bigger contribution to nonproliferation reflects its growing global role. It is obvious that that China is making great strides in its nuclear weapons nonproliferation policy to uphold world peace while holding high the banner of building a community of shared future for mankind.

However, the CTBT has not yet entered into force, partly because of its entry-into-force conditions clause. Article XIV of the Treaty notes that it will enter into force 180 days after the date of deposit of the instruments of ratification of the 44 States listed in Annex II. These 44 States participated in the negotiations of the Treaty in 1996 and possessed nuclear power or research reactors at the time. Of the 44 States included in Annex II required for entry into force of the CTBT, all have signed with the three exceptions - the Democratic People's Republic of Korea, India, and Pakistan. Five of the 44 Annex II States have signed but not ratified the CTBT – China, Egypt, Iran, Israel, and the US.

Another reason is the US. The report “Entry into Force of the CTBT: All Roads Lead to Washington” by Nuclear Threat Initiative (NTI) said “the absence of support from the US remains the most significant challenge to the Treaty's viability.”

As mentioned above, the US and China are the only remaining Non-Proliferation Treaty (NPT) Nuclear Weapon States that have not ratified the CTBT. Prospects for achieving the Treaty's entry into force will diminish unless China and the US ratify the CTBT. It isn’t China’s fault. China has sufficient reasons to wait for the US Congress to ratify the Treaty first.

However, if the US makes the ratification, “I firmly believe that China would definitely follow,” said Sha Zukang, a former Chinese ambassador to the negotiations.

"For several millennia, peace has been in the blood of us Chinese and a part of our DNA," said President Xi Jinping at the UN Office at Geneva. China will, as always, continue to contribute to world peace. The five IMS stations installed in China send a strong signal to the international community that China always firmly supports the purposes and objectives of the Treaty, and makes continuous contributions to enhancing the Treaty’s verification regime. Even though today with the world facing various significant challenges, China will consistently support the promotion of the nuclear disarmament process with a constructive attitude in the foreseeable future.

(Zhu Yue is an academic secretary at the Institute of Law, Chinese Academy of Social Sciences. The article reflects the author's opinion, and not necessarily the view of CGTN.)