Chinese increasingly heard around the world 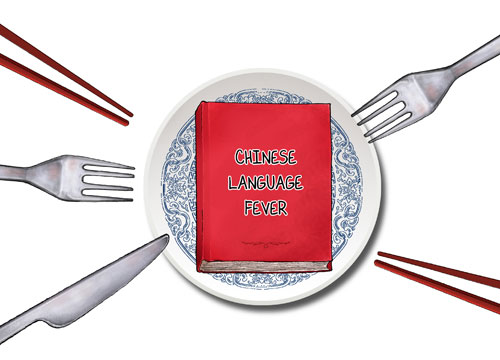 With the growing enthusiasm for learning Chinese around the world in recent years, there has been increased understanding of Chinese vocabulary and concepts among foreigners.

According to a report on overseas understanding of Chinese words issued by the China Foreign Languages Publishing Administration on Saturday, the first of its kind, there has been a drastic rise in the popularity of Chinese words among foreigners in the past few years.

The report indicates that most of the top 100 most frequently said Chinese words by foreigners belong to those related to Chinese traditions or culture, such as chunjie, or Spring Festival, and chongyang, or Double Ninth Festival (the ninth day of the lunar ninth month). Shaolin, referring to the Shaolin Temple, which is famous for promoting Chinese kung fu, was listed as the most recognized Chinese word.

Chinese political terms, such as mingyun gongtongti, or community with shared future for mankind, and yi dai yi lu, or Belt and Road Initiative, have also become popular among foreigners in recent years. Words such as zhongguomeng, or Chinese Dream, and zhongguo daolu, or Chinese road, are also among the 100 Chinese words most frequently used or understood by foreigners.

The rising popularity of such Chinese words in other parts of the world is a result of the fruitful major-country diplomacy initiated by China in recent years and also a reflection of the increased global influence of China as a result of its fast-growing economy. It is natural for other countries to keep an attentive ear to the voice of an influential and emerging power like China.

Some Chinese economic terms have also become increasingly familiar to foreign people. Of a variety of such words, the names of the Chinese currency, renminbi and yuan are most widely known to foreigners, along with zhifubao, or Alipay. No wonder that during this year's Spring Festival period, tens of thousands of sellers in Southeast Asian nations accepted Alipay or Wechat Pay from Chinese customers as alternatives to traditional ways of payment.

Food is the first necessity of people, as an old Chinese saying puts it. Chinese food has long been a favorite of many foreigners. Of the top 100 most frequently mentioned Chinese words, eight are Chinese foods, such as jiaozi, or dumplings, tofu, or bean curd, huoguo, or hot pot, goqi, or Chinese wolfberry, mantou, or steamed bun, and jianbing, or pancake.

That foreigners say Chinese words is to some extent a reflection of their mastering of some knowledge of China. The country's manufacturing now ranks first in the world. For ordinary people in many foreign countries, goods manufactured in China are an indispensable part of their daily lives, which has helped deepen their understanding of China.

The acceptance of more and more Chinese words by foreigners is also a result of the ever-increasing popularity of Chinese learning in foreign countries. A Chinese-learning fever has been seen in a large number of countries across the world. As an institution to promote Chinese and disseminate Chinese culture, the Confucius Institute has set up 511 branches and 1,073 classrooms in 140 countries and regions, with 2.1 million registered students. Chinese companies now employ large numbers of local employees overseas, many of whom work hard to learn Chinese for their work needs.

The rising popularity of Chinese words among foreigners is also a kind of cultural integration although this is a gradual process. The broader cultural integration between China and other countries, however, still hinges on the expansion of Chinese-promoting institutions, China's economic buildup and the advancement of the Belt and Road Initiative.

(The article was first published in Legal Evening News.)